1) To provide the best facility and most comprehensive services available to get you back in the game as fast and as safely as possible.

2) To provide a strong community of likeminded individuals -- who aren't afraid of the hard miles, the early mornings, the late nights and doing everything that's necessary to prevent injury or return to play -- a community that is respected for their tireless work ethic and bonded by their enthusiasm for the crucible of training - and life by extension.

- Was Sailor Jack a real person? - 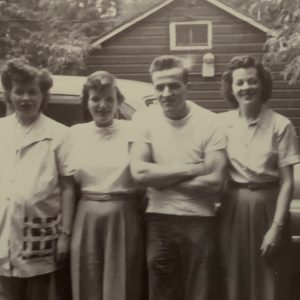 Yes.  Jack was Christopher's -- the owner's -- Grandfather.  A World War II Veteran, he served in the Canadian Forces -- Navy -- on the HMCS Uganda, known most notably for having transported Winston Churchill and his staff to Washington in 1943 and acting, on more than one occasion, as an escort for various naval convoys.

The biggest being the attachment to the 15th Cruiser Squadron of the Mediterranean Fleet on 10 July 1943, whose mission it was to aid in the allied invasion of Sicily (1).  The facility was opened in part to commemorate his service and, in equal part, to become his legacy - a living epitaph as it were.

A dedicated family man -- a son, a brother, a husband, a father, a grandfather and a great-grandfather -- quick with a quip, enjoyed a scotch while watching CBC Saturday Night Hockey or Sunday NFL Football.  He relished any excuse to gather 'round the kitchen table and spend time surrounded by his family and the people he loved most.  This atmosphere of family and sense of community is the vibe that we try so hard to nurture within our clinic and gym.

- What Is Sailor Jacks Performance Centre? -

Since it's inception, in December 2014, Sailor Jack's has rapidly grown into a thriving community for sports rehabilitation, strength, athletic performance and lifestyle enthusiasts alike!

Every inch of our clinic is dedicated to providing solutions to your fitness problems and delivering to you, the experience and results you need to get back into the game and back to living life on your own terms.